Myofascial Pictures – Before and After

A Myofascial Picture is Worth a Thousand Words or 2,000 pounds per square inch of Affirmation!

Disclaimer- original post was cut and pasted by myself. I originally and currently have removed the front view of myself. Myofascial Release does help to return one to optimal mobility and alignment as well as release emotional patterns and belief systems. It has taken an enormous amount of courage on my part to post actual photos of myself but I am still not ready to review what the frontal view looks like. Maybe someday but honestly anyone who knows me knows my goal and belief in being upfront and honest. With Barnes Myofascial Release there is no reason what so ever to attempt to make false claims or proven false pictures. I am just a therapist who became a patient who learned how to be a better therapist to assist my clients to actually have lasting results.  With honestly, authenticity and compassion, Heather Bryan, PTA, LMT, JFB MFR Therapist.

Myofascial pictures shows the undeniable results that are possible when treated with Myofascia
l Release and not just any form of Myofascial Release, but the John F Barnes Approach and by someone who has been trained specifically in this method.  There is not another thing like it!  If they break out the oil or are not waiting for the melt and the stretch of taffy, then you are not experiencing authenticity.

I was trained originally in what I thought was myofascial release in PTA school and then again in LMT school but never in a trillion years could any of those forms of it take me and my body to the level of healing that this approach has. I never knew what fascia really was. I never knew that my body looked this far off kilter. Sure I had enormous amounts of pain but I did not realize the depth of magnitude of what what causing it. I had pain in this spot or that and I just had to use as much force as humanly possibly to stretch it, pull it, twist it, rub it, traction it, pull it, ultrasound it, ice it and heat it to the point of giving myself burns (actually did).  I only got worse and even to the point where it felt like my body was now attacking and squeezing the life out of me and it was!

My Desperation of Pain and Pressure

My pain was driving me to the point of madness and desperation.  I was in agony, most likely depressed because I could not fix myself with what I knew how to do and had used day in and day out with my own patients and ultimately I was losing my ability to perform my job. As I was nearing time for my license renewal and in need of the required continuing education, I began to search the web for answers, help and CEUs.  I quickly landed on now mentor and friend’s link to what I now know is the answer to so many issues within the body and mine was prime for a new way. However as I look at these pictures I am still in shock at the before view. I will admit that I went for my first intensive therapy for the therapist treatment in February of 2016, a little over a year and a half after my initiation into the actually way the human body works and not what a text book said it should be. See we all have fascia just like we all have finger prints and as we know that no 2 finger prints are alike and they are unique to you and me, well so is our fascia and they way in which is presents when injured.  In fact I could sustain the same type of injury at 2 different times in my life and they may not affect my fascial system the same way and there for the pain pattern, restriction pattern, pattern of dysfunction would be different for each.

Finally Time for ME, My T4T ( Therapy for the Therapist) 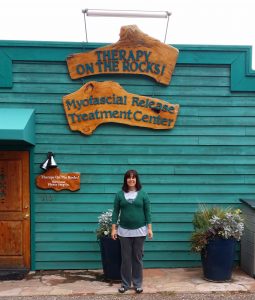 Therapy on the Rocks

By the time I finally attended my first T4T (Therapy for the Therapist or an Intensive for a non-therapist patient as they are referred to, I had been getting treated at least monthly if not a bit more for sometime. Even though I was originally brought to this work due to my own injury, once I realized that I could myself learn to become a “Myofascial Release” therapist and provide MFR to my clients, I began to take as many classes as possible, enrolled in LMT school, did internships etc.  In my mind I was justifying seeking my own treatment which felt selfish in a way when there were so many others worse of than me.  Is this not true of so many of us out there that but others before ourselves? I can only shutter at the thought of what the picture would have revealed if my T4T was sooner rather than later, but the point is I took the leap. Obviously by the looks of the before picture I was already in position to take off.

Sooner Rather Than Later But Never IS NOT an Option!

Moral and point of my story is that whatever path gets each of us there to an intensive or simply onto the treatment table of a John Barnes trained therapist, make it sooner rather than later. So many therapist themselves that experience the true and authentic lasting results that are readily and easily provided to assist to healing often themselves end up becoming practitioners of this work. Hard to call it work though!  I do not think in terms of should have or why didn’t I but wow thank the stars above I did.  Let me give you the numbers why. On Day 1 we all have an initial evaluation. Generally speaking this is more for documentation purposed because as Barnes Myofascial Therapist we deal in Feelings and Results!  So Day 1 here were some of the numbers: I was informed I was 5’5″, I am actually 5’7.5″.  I was some 55 degrees forward head of my base of support (feet). After 20-21 sessions I gained back 1.4″ in vertical height, and I returned to have vertical alignment of head over shoulders, over hips over feet and still had slight forward head posture to approximately 7 to 10 degrees at most. I have full active range of motion of my left shoulder, I could walk, I even climb the rocks of Sedona, AZ, I could sneeze fully, and my pain level went to intermittent and 3 at worst. I was able to resume exercising and had my own private mobile MFR practice in the end. However this is not the end of the story for me.

I still have work to do both personally and to provide to others professionally.  Myofascial Release is about a whole way of seeing the world and our place within it.  MFR teaches us how to be gentle with ourselves in all areas of life and activities we do.  We do live in a world that wants to deny pain, medicate pain, cut pain out etc. MFR teaches each client who is willing and able how to self treat themselves to be more effective as well as keep cost down. I myself will always strive for getting treated sooner rather than later  and will approach me activities and self care following the same principles of gentle sustained pressure, waiting and melting into a release. Just take a look at the picture again that is a representation of the most beneficial, real, gentle and lasting outcomes that myofascial release can provide not just me but you too!  Did you know that the astronaut Shepard recently came back from a 2 year stay in outer space and that the news reported he gained 2 inches in verticallity back.  The 2 inches came from time spent out of gravity.  Gravity pulls each of  us this way and that way twisting and bending us into a scrunched up postural mess. I personally witnessed the gains!  I gained back almost 1.5 inches in 1 week merely with gentle sustained pressure and a few talented and gifted therapist at the treatment center. When I got into my car at the airport to go home, I had to adjust all my mirrors to the new height I had.

My next T4T is scheduled in October of this year and I will most definitely feel the results. Due to the fact of multiple surgeries and falls, a life time of denying the pain, a life time of over stretching and forcing my tissues, and now knowing a better way and sometimes we need a helping hand, sometimes multiple hands. At a T4T there are multiple therapist at a time assisting us to release our restrictions and return us to a fluid state that is as pain-free and active as possible. Even if you cannot get to a T4T, ask your therapist if they have a way to provide a multi- therapist session for you until you yourself can make a leap if you so desire. So we all have a choice and the choice is yours to make. One aspect though is in seeking myofascial release therapy, please make sure it is given by a John Barnes therapist. You deserve the best.

To find more information on how Myofascial Release can help you or to learn how to schedule your appointment please visit https://www.mfroftampabay.com/