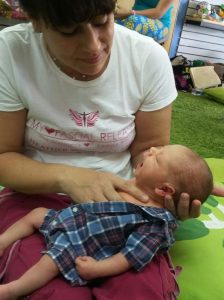 Tongue Tie is about the inability to attach and not let go.  John Barnes teaches us as practitioner to let go of the outcome, to detach from the outcome and in doing so we will actually have better results. I know that I am not alone in finding this to be a huge area frequently needing to be revisited as a practitioner especially coming from a background and a societal norm that sees it differently. Since my startling discover almost 2 years ago that began to show me a whole new way and how which at times I guess I have held on to the edges of belief systems by the skin of my teeth and becoming things, liking things that I “thought” I didn’t or wasn’t good at and for once finding ways to actually change, modify or rethink things that were repeated patterns in my life, so much of absolutely everything has changed and for the better! So as I further detached and let go and allowed the myofascial release to do its thing, some babies actually gained the ability to attach and not let go.

You Never Know Until You Try

I never wanted to be a business owner, now I am. I did not know that it was okay to not know. It was better for everything if I actually cared less, really strange but true. Detaching from the outcome actually got not only the results desired but better than expected! Learned I actually can read and like it. Learned that I actually love to travel and even by myself including eating out and site seeing! I want to see the world and I am now going to Hawaii somewhere I said I did not think I could tolerate the amount of time in an airplane. I guess Australia is next. I thought I never could go on stage and be a demo, well that isn’t a problem even when I am not physically and aesthetically ideal. Never was able to do book keeping, still a bit dicey but I have sought out help for that another area I never was able to do, I was supposed to be able to do everything, well I can’t do everything nor do I want to. I never wanted or thought there were other things to learn, I love learning and don’t ever want to stop. I never wanted to work with kids because I wasn’t good handling all the things that came out of them which would make things project out of me, not true anymore! I also never wanted or thought I could speak in front of people, well I can.

Yesterday was my first speaking engagement to a large scale group 25-40 over the span of the morning – afternoon of a support tongue tie support group for mommies and their babies where there are IBLC’s and NC’s assisting in teaching and getting babies to latch. The closer I got to the venue I really started to get a bit nervous. When I spoke with the nurses prior to the event they thought maybe I would do 1 demo on a baby. So as I unloaded the car into my red wagon, table etc. I did have all my promo Pink Balls in a large bag over my shoulder like Santa or something, I must have looked like some person who had no clue what this was going to be all about. So in the end all I really needed was the bag of balls for the small army of the siblings that were manning every square inch of free floor space because a lady dressed in pink with a laundry bag of pink bouncing balls has to be the guy who dresses in reds friend or something. As I began passing them out, it dawns on me that the universe could not have gifted a better opener than that. Happy content siblings that will not be occupied while mommies and little sis or bro are busy.

As I began to take a broader look at my surroundings, I soon realized that I wasn’t going to need that table after alI and we had a sea of wee ones that might have just been released from the NICU.  I then broadened and opened further to release the anxiety and nervous energy to take in the atmosphere. Internally again processing the scene in front and feeling the palpable emotions that painted the air think, fear, anxiety, pain, worry, desperation, restrictions, hunger, fresh surgical and laser scars, and breast that were swollen with nutrition that either could not be utilized for one reason or another. There was even a sweet wee one that had not poo’d in 14 days, yes per hear say, the MD was aware! The labels given and the situations of trauma that circled each one drove home another fact for me. The fact that restrictions even in a “normal” easy birth and delivery are the beginning of it all and actually we all have a major reminder of it our belly button which John Barnes says that is actually our first scar and it really is.

So jumping right in because there is no time like the present and what did I have to lose except some more layers of my own fears, I began my presentation with all the toddlers and crawlers weaving around me, near me and even had a few mouthing my toes. I was so surprised afterwards at the depth of the questions asked and light bulbs as John refers to it go on and feel the shift in the room of the transition of emotions to hope and excitement take over. Before I knew it I was on the ground and one after the other these mommies were eagerly handing their babies over. I never needed my table, this was real life in action. This is where my own fears wanted to creep back into the mix as most of these wee ones were days, or weeks old and just a few pounds. Then an old belief system crept in revolving protocols and how its “supposed” to be done. Did I not just get done telling all these individuals that there is no protocol except never forcing and so protocol smotocol, whats the worst that can happen, Nothing!  So a day MFR of love began.

Shedding of Restrictions a 2 way Gift

I was given so many gifts too! As the babies were releasing, they were releasing everything and anything and as they did so I finally released my hypersensitive gag and stomach reflex.  Finally nothing came out of me in return and I learned it doesn’t really bother me to be spit on, peed on, vomited on, poo’d on, burped and tooted on. I was in a sea of love and there is no other way to describe it. This instantaneous and what I call miraculous, magically results again are still so new to me in my 2 years of finally providing a form of health care that works.  I do hope to never shed to joy of feeling the “aw” of that and I guess it again is a choice, so I choose to always view each and every release and treatment in just that way. I bared witness to these changes with no effort, no figuring it out, just feeling and following.

I felt such a deeper love and connection to this work, to John, to myself, to well everything. Babies whose mouths simply didn’t open enough or function to suck etc. minutes prior, began to open wider and wider, yawning and stretching, tongues and lips shaking and quivering, burping, peeing, tooting etc. within just a few precious moments as these babies were handed back to the mommies they began to latch, suckle and maintain the connection and receive not only the needed nutrients but connect on a deeper level with their mommies that just want to feed and care for their babies. Some were even treated while nursing. And about the figuring it part, well these little miracles of life, they show you right where they need it. One little fella had his little fist pressed into the side of his left jaw and was having a very hard time feeding so while mom attempted to keep the connection I placed my fingers onto his little cheeks and he placed his little hand over mine and actually compressed it further and as his jaw and little neck began to unwind, the most powerful latch and full powered suck began and he nursed fully and never another moment of trouble. In checking in later in the evening with mom, all later feeding were going so much better!

John F Barnes I know I express and feel the level of my affection and gratitude for you and Myofascial Release often with each new day, each treatment but this day again has taken it to a whole new level. I realized the significant of getting treated sooner. I realized the depth of broadening our focus, looking past labels, and just how many restrictions are not realized by a health care system that only follows protocols and norms.  How many labels have been placed upon infants as just being fussy or colicky and dismiss so many clues right there in front of us. Mothers whose intuitive sense is diminished by fear, pain and anxiety.  Then we set ourselves up for the construction of layer upon layer of fascial restrictions. It is so critically important to treat and get treated right away even if nothing significantly screams out at us.  The fact that these immediate changes, the immediate results were so easily achieved is because the body has not have time yet to experience gravity and posture and building of its “onion” etc. I feel that because these wee ones cannot change their positions themselves because they do not yet have the control or ability to move their bodies against gravity like we do that it too builds layers to the fascial onion.  So what initially may present as a cranky baby, just might be one that needs a little myofascial treatment and unwinding.

I see a strange contradiction but as we have the ability to move but have become more and more sedentary and develop restrictions as a result of computers and phones we choose not to move and while these wee ones who want to be mobile need some help in do so to make sure they develop a healthy fascial system that is free to move without having to do so around a restriction that places up to 2000 pounds per square inch of pressure all things its connected to, which is everything. Myofascial Release is about creating mobility and flow of all things freely and without discomfort whether its body parts, bodily fluids, breast milk, and having a fascial system that allows for that. Thank you to all the Mommies for trusting myself and myofascial release yesterday and taking the leap of faith, trusting that there is an alternative way, that is an alternative no more.

For some additional readings http://www.myofascialrelease.com/resources/articles.aspx